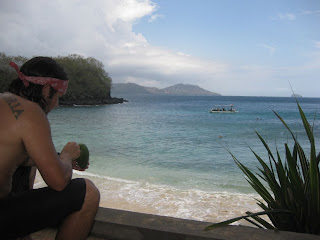 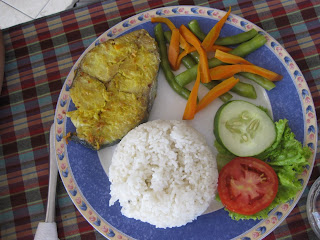 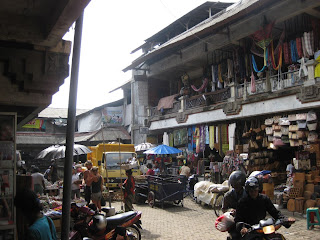 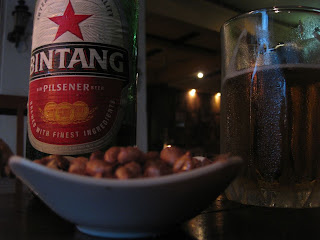 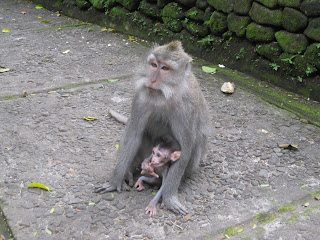 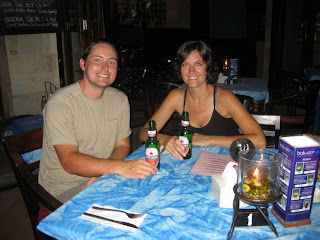 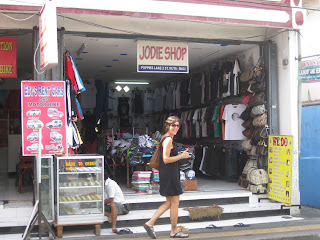 Its amazing how much cultures can change with a short plane ride. Jodie and I have had a bit of a culture shock since leaving Australia and arriving in Bali. It has been very interesting, entertaining and refreshing.
Really the only thing that hasn't changed is the heat, in fact it seems to be a little hotter here, and maybe even a bit more humid.
90+90=sweaty. 90 degrees plus 90 percent humidity makes for a very sweaty Eli, and even Jodie who is not much of a sweater herself is starting to glisten a bit. That is really the only part of Bali that we don't care for. The people are wonderful, the scenery is terrific and the food is delicious.
Shortly after getting off the plane, I became a millionaire with a swipe of my ATM card. Thats right, I took out a cool 1.5 million Rupiah, or the equivalent of $150 USD. We are still adjusting to the mental strain of lopping 4 zeros off of all the prices to convert them to a familiar value. Things are markedly cheaper here, which is a relief to our budget and my inherent thriftiness. After spending a month and a half in New Zealand and Australia where we were blowing our budget everyday on nothing luxurious by any stretch of the imagination. However, here in Bali we are managing to stay right on or below our budget everyday and we have definitely upped our standard of living. While in Cairns, we were staying in a hostel ($30 for both of us sharing a room with 2-4 others, cooking at least two meals a day, and when we did go out to eat it was usually fast food because that was the cheapest option. We might have a $3 beer from the store which was a treat, or share a $6 beer from a bar if we wanted some entertainment. Today in Bali, we spent $10 for our own room with a bathroom, private porch and breakfast included. We spent $6 on lunch in a restaurant with fresh food, and fresh fruit juice. 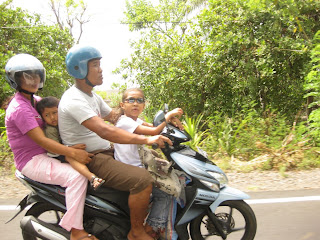 Dinner was another $6 I had fresh snapper, Jodie had a seafood combination of calamari, fish and shrimp. We also managed to fit in a couple of full body massages for $4 a piece. We are happy.
We started off our time in Kuta, which is a very interesting place. It is the heart of tourism in Bali, and its bustling with restaurants, tons of motorbikes, and a million stores that seem to be selling the exact same stuff. It stretches out along a beach in front of nice resorts and many restaurants. Kuta reminded me very much of the beach towns in Mexico that cater to American spring breakers, like Rocky Point or Ensanada. The only difference is instead of rowdy Americans, there are rowdy Australians. It has a raucous night life with lots of bars and even a strip of high end shopping stores. Its a nice enough place but it didn't feel very Balinese to us. Every ten steps there was another shop with a eager to make you deal merchant trying to sell you sunglasses or t-shirts. Luckily for them I just so happened to need some sunglasses. So after walking away from about half a dozen merchants selling the EXACT same sunglasses, I finally found one at the end of the day that I worked down from 250,000 Rupiah ($25) to about 3,000 ($3). Jodie said it couldn't be done, but I found $3 sunglasses. 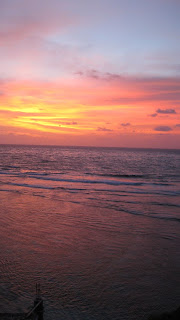