We have been in Hawaii now for 2 weeks and it will be hard to leave next weekend. Our days have been filled with coffee, beaches, mice and the occasional tv star. Shortly after we arrived we 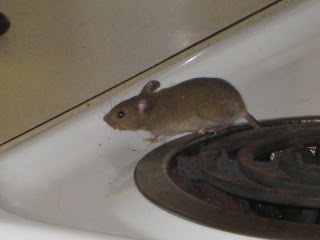 discovered a mouse running a muck around the house. After realizing that he could make it onto the stove and counter tops we decided it was time for him to leave us. A mouse trap, some cheese (peanut butter didn't work), and a little persistence later, we caught ourselves a mouse. Then his friend. (We won't show you the after picture, only the before one).
Once we caught the mouse we needed something else to pass the time so we decided to stalk some actors from the TV show Lost. Si's next door neighbor works for the show and leaked a couple of upcoming filming locations to us. After many mosquito bites and a couple of hours standing in the rain, we got to see the characters of Jack and Hurley filming on a hiking trail. We were pretty excited because we walked right passed them. I know, we are big nerds. 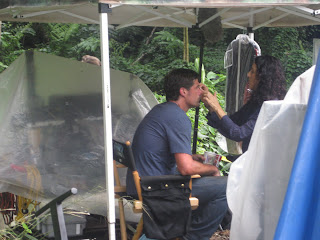 Si has been a gracious host and taken us out on the town a couple times with some of his friends. One night we spent the better part of 3 hours singing karaoke at a place called Karaoke hut. We think Si needs to start a band, and Eli decided he should never be allowed near a microphone. We had a great time and are looking forward to some more karaoke before we leave. 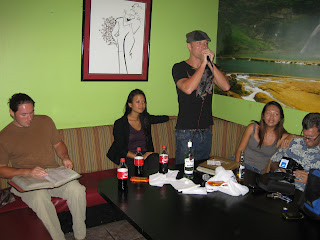 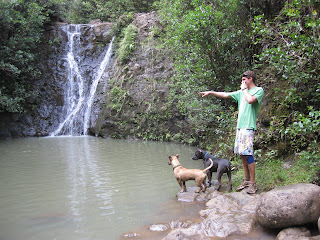 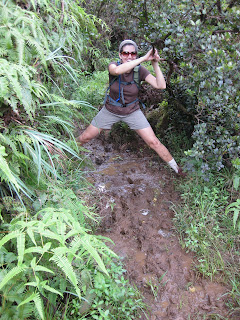 Yesterday we hiked Laie waterfall trail. The 4 hour hike turned into a 6 hour hike because the mud was so thick and the rocks were slippery. Along the way we munched on wild strawberry guavas. Si's roommate Tyler was our guide and he brought along his 2 dogs, Myles and Zion. Tyler hiked ahead of us so every 3 minutes or so, Myles would run back to check on us and lead the way through the trail. What a good dog.

Today we are a bit sore, so we are going to relax at the beach. As soon as we find out where the 6 year old boy in the balloon is (currently on CNN), we will head out.

We are officially on our World Trip. We can stop holding our breath. We left Oregon a few weeks ago to drive south to Arizona making stops along the way to visit friends and family.
In Arizona, we finished up our packing and we were able to fit our next 9 months of clothing, cooking, and camping supplies into 1 backpack each. I am sure along the way we will be adding and swapping out items as they get warn or as our needs change. What a weird thing it will be to rely only on what we carry on our backs. I am sure it will be strange when we get back next year, open up our storage unit and find all of our old stuff. Will we be happy or will we be overwhelmed?
We are now in Hawaii, staying through October, living with Si (jodie's brother). This is where we will be do the rest of our trip planning. We also want to fly over to the Big Island for a few days since we have never been there. Today we will go to a beach, no doubt, maybe try a little surfing if the waves are cooperative. I imagine tomorrow's plans will be much of the same.
We miss our friends and families already! It was so great to spend time with everyone before we left.
Please continue to email or call us. Jodie's new email: jodiemchamberlain@yahoo.com
Eli's email: Eli@notnow.com
at 12:01 PM 2 comments: