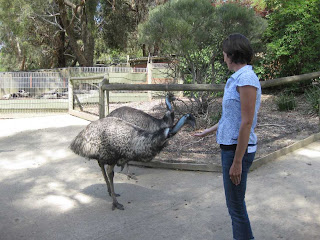 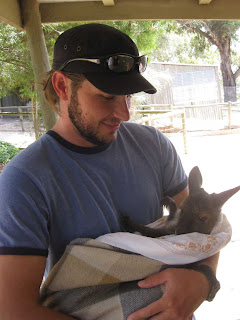 Wow we have been lazy about blogging, now we have some catching up to do.
We are currently 30,000 ft somewhere above the east coast of Australia on our way from Sydney to Cairns. We have been in Australia about a week now and are having a great time.
We arrived in Melbourne anxious to see our friend Rachel from high school and to sleep in a real bed.
It had been a few years since either of us had seen Rachel, and now she is married with a son and another child on the way. Rachel and Mark where very gracious hosts, we had a comfy bed to sleep in, wonderful home-cooked meals and a great tour guide. They are in the process of building a house so we actually stayed at a friends house where they are temporarily living. Their friends name is Ash and he was very welcoming to allow us strangers to stay in his house for a few days. Ash and I had some great conversations about Australian customs, politics and the strange sport of Cricket. 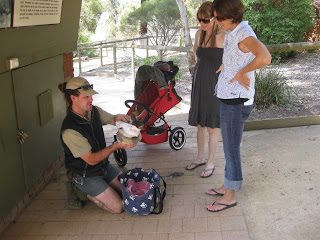 The first stop Rachel took us to was a local wildlife park.
It wasn't terribly elaborate but it was very entertaining. Upon entering the park we bought some kangaroo food and found to our delight that once inside the park, about 40 kangaroos were just roaming around. Most of them were lounging in the shade but the real friendly ones would come right up to you happily eating the food right out of your hand. 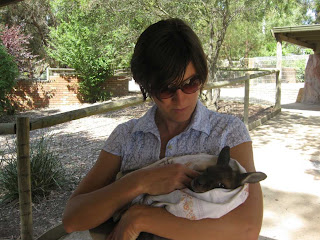 I had always assumed that kangaroos were not to be petted, but these ones didn't seem to mind it one bit. We wandered around the park for a few hours checking out koalas, wallabies, wombats, tazmanian devils and the larger Red Kangaroos which some were as tall as myself and they were fenced off in a separate area. Rachel had heard a rumor about a baby kangaroo that had been orphaned and one of the zoo keepers were taking care of it. We asked around and after a few minutes we were introduced to Glen the zoo keeper. He was very friendly and looked very Australian with his short shorts and boots. He went into a room and retrieved a ball of blankets which contained a young joey named "Ruby". She was a little bigger than a house cat and Glen had explained that her mother got her head stuck in tree stump while she was in the pouch and it took a while to get her free. 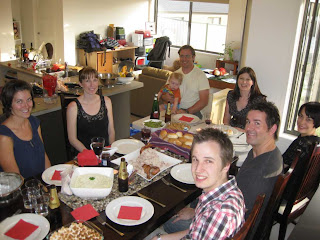 In fear of her hurting the baby Glen had taken the joey under his care and had been taking it home with him every night for the last several months. He told us he had to feed it every four hours, twenty four hours a day so he felt like a mother of a newborn. It was funny to picture this burly Australian bloke bottle feeding a baby kangaroo in the wee hours of the morning.
As we were taking turns holding Ruby, we were making conversation with Glen and Rachel asked him what he likes to do for fun. Expecting an answer of maybe playing sports, camping, hiking or something, but I should have known better. "Snake catching, I like going into the bush and finding snakes, or people will call me when they need one removed" he told us. I felt like I was standing next to Crocodile Steve. Then Glen told us a story about how he used to live with a guy who had a few tame dingos. He said they really made a mess out of everything and he "woke up one morning and found out that the dingo ate my phone" I never thought I would here that sentence.
We then watched glen feed some of Australia's deadly snakes by opening up the doors on the glass enclosures and dangling a dead mouse in front of the snakes with some forceps. I was keeping my distance, not being particularly fond of poisonous snakes especially when there is no physical barrier between us, but Jodie didn't seem to mind. The snake feedings weren't quite as eventful as I was picturing but I was ok with that.
The next morning we relaxed around the house glad to be able to spread out and lounge. In the afternoon we drove south to a place called the "Twelve Apostles" which was a series of rock outcroppings jutting out of the sea. We waded through the seas of Asian tourists to an overlook where we could see the ocean cliffs and waves crashing below. It was very scenic. On Friday we celebrated Thanksgiving with all the traditional foods. Rachel had some Aussie friends come over who had never celebrated Thanksgiving before, and we all had a good time. We cooked the turkey on the barbie and it was delicious! It almost felt like we were back home. One of my favorite Australian foods that Rachel introduced to us were these chocolate covered wafers called Timtams. She even showed us a special way of eating them called a "Timtam slam". You bite off opposing corners of the wafer and then use it as a straw to suck up some hot beverage (we had coffee). After about two seconds of sucking you shove the Timtam into your mouth just before the whole thing melts. I would put on the order of S'mores as far as deliciousness goes.
We left Rachel's on Saturday to set out for Sydney. We made a quick stop in downtown Melbourne for some lunch with Rachel before we said our good byes and she took the train back to her house. Our plan was to stop in Kosciousko National Park to hike the highest peak in Australia. Of course the next morning the weather was horrible so we decided to instead spend the day in the capital of Canberra. We stopped at the National Museum of Australia which was really fascinating. After a quick drive around the capital we found a rest stop on the side of the road where we slept inside our car once more. This time our car was a little four door hatchback, but we managed to fit with the back seats folded flat and the front seats pushed all the way forward. Pretty comfy actually. 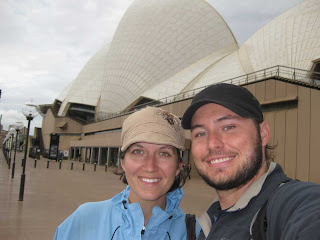 Sydney involved mainly site seeing and lots of walking. We toured around the opera house, the harbour bridge, national art museum, bondi beach and such. The weather was not spectacular, light rain and lots of gusty wind but we had a good time anyway. Our favorite part of the city was the royal botanic gardens. Although beautiful, it was not the plantlife that got our attention, but the enormous bats. They are called Flying Foxes they are so big. There was hundreds of them just hangin' out upside down in the trees. Later on we swore we saw them flying around the city, it really cool. Sydney is a beautiful city but we are anxious to check out the Northeastern coast and the great barrier reef!
at 9:15 PM